Every ten years since 1952, Sight and Sound Film Magazine has asked a selection of international film makers and critics to compile lists of what, in their opinions, are the ten greatest films of all time. These lists serve as ballots for the supposedly authoritative top ten list that the magazine publishes. It is Citizen Kane‘s chart-topping dominance on this survey since 1962 that, I believe, has lead to its reputation as The Greatest Film Of All Time. Kane didn’t even crack the top ten in 1952. It fell into the runners up catagory with the dubious likes of Chaplin’s Verdoux.

In addition to publishing the “winners” list, the magazine also prints all of the ballots, which usually make for more interesting reading than top ten. Often, the compilers cannot resist writing a short note either apologizing to films or directors excluded or explaining that had they been asked another day, they’d have compiled a completely different set of films. Here are the ten films that were blowing up Lotte Eisner’s skirt in 1962 and her brief note explaining why she chose what she did (she was still carrying a torch for Verdoux!).

Fast forward ten years and Peter Bogdanovich, whose films I quite like up to and including the great They All Laughed (which ranked on Tarantino’s 2002 Sight and Sound poll), is asked to weigh in. Along with his top ten films, he added what is without a doubt the most pretentious note in the fifty years of the poll. 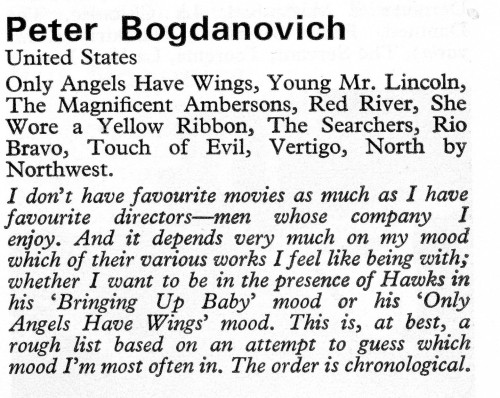 Bogdanovich must have thought that that sounded pretty good because he made virtually the same remarks four decades later when AFI made the mistake of asking him what his favorite film is.

This entry was posted in cinema, context, dig the critics. Bookmark the permalink.

4 responses to “bogdanovich picks the classics”