For its March 1972 issue, Playboy magazine, sent its cameras to the set of that weird Merchant Ivory film Savages and the resulting photos are as weird as the movie. It’s sort of funny to think that maybe some unlucky admirers of busty women might have been inspired by this photo-spread to go into theaters to watch this snoozefest. While preparing this post, I realized that one of the two credited screenwriters for this thing was future Saturday Night Live writer Michael O’Donoghue. My opinion of him remains unchanged. The original captions to the photos follow. Above, “In primitive nonapparel are Susan Blakely, one of the Young Lovers, Kathleen Widdoes, the woman of the Man-Woman, and Asha Puthli, the Forest Girl.” 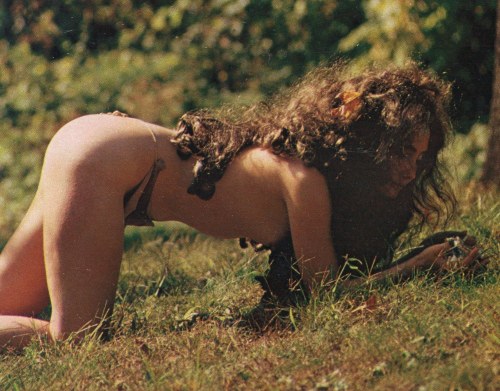 “Kathleen Widdoes, whose screen credits include leading roles in The Group and The Sea Gull, forages for edible roots, berries and bugs in the forest.” She was also in Petulia.

“In a touching scene, Asha and Kathleen meet in the old car.”

“Peering out a window, Susie spies her lover following Salome into the brush. Then she heads out to the lawn and back into the forest, returning to the tribe—and her primitive condition.”

Roaming through the house, the tribe finds other remnants of civilization: a life-size statue of Minerva, before which the Priestess places the croquet ball to signal the birth of religion; an elegant dining room cluttered with the remains of a banquet; and a bathroom (above), which the Decadent (Ultra Violet) investigates.”

Asha Puthli, the sensuous Indian actress portraying the Forest Girl, is a singer who recently completed a successful concert tour in Calcutta, Bombay and New Delhi. Early in the film, running through the woods, she is captured by savages, who are entranced by her bright beaded loincloth. Later, in the house, where she’s known by the name Asha, she is forced to become the ladies’ maid.” 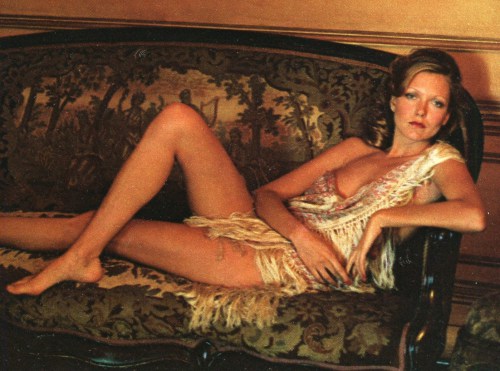 “Separated from her lover, Andrew, Susie, given the name Cecily in the house, forlornly awaits his return.”