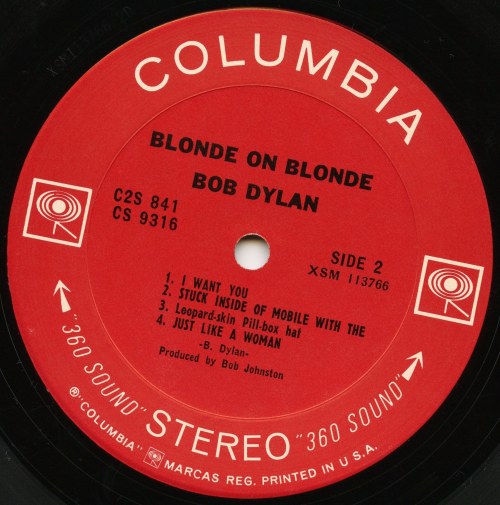 I’ve done this before but it’s just now occurred to me that this is a feature on its own. Here’s a recent pick up, a Dylan mystery: a stereo copy of Blonde on Blonde. It’s an early pressing but the absence of Claudia Cardinale and the whispering scene in the gate (see below) seem to rule out it being a first pressing—either way, the two records themselves are in pristine condition, virtually unplayed. The serial and matrix numbers, along with the “Stuck Inside Of Mobile With The” listing (the track listing in the gate continues the song’s title reading: “Memphis Blues Again”) and the presence of the “STEREO ‘360° SOUND'” logo all seem to indicate that it’s a first pressing. Despite this site‘s seemingly exhaustive study of the endless differences in the various versions of the LP’s release, I remain confused as to what exactly it is that I have here.

Apparently, Cardinale wasn’t involved in the photo shoot for the album but was in the photographer‘s portfolio and Dylan thought it would be cool to include it—and who can blame him?

This entry was posted in music, record labels. Bookmark the permalink.